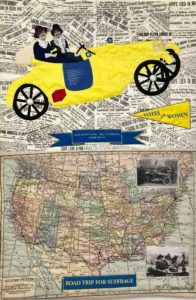 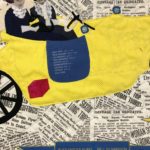 I chose to make my quilt about Alice Snitjer Burke and Nell Richardson, and their road trip with their kitten mascot Saxon, because I was captivated by the accounts of their adventures along the way. I also wanted to portray women who were not so well-known but who contributed to the movement. This quilt was fun to make. I used headlines about their trip for the background and put them in their yellow car, along with their kitten. I outlined their route on the map and included photos of the christening event and their triumphant return at the end of their journey. I used ink-jet printed images for the headlines and the photos. The car and the two women were drawn by me and then rendered in fabric and appliquéd to the background. I used commercial and ink-jet printed cotton fabric, wool for Saxon, beads, perle cotton hand embroidery thread, cotton and rayon machine thread, and fabric paints.

Research:
Alice Snitjer Burke was born in Illinois in 1875. Her family moved to San Jose in 1894, where she married her first husband, Charles Armstrong. They had a daughter, Bonney, born in 1896. Charles joined President Theodore Roosevelt’s Rough Riders in 1898 and died soon after from typhoid fever. Two years later, Alice married Dr. Richard Burke. He died less than a year later, leaving her a widow for the second time at the age of about 26. Alice left her daughter Bonney with her parents in 1906. After that, she spent a lot of her time speaking for suffrage. She spoke on one corner in New York (Broadway and 96th Street) every night for 165 nights in a row. In 1913 Alice was the secretary of the Suffrage Pure Food Shop Company, the first suffrage food store and soda fountain. In 1916 Alice and Nell Richardson made their very arduous and highly watched road trip around the United States, speaking for women’s suffrage.  Alice did much of the auto maintenance herself.  Their vehicle was a yellow Saxon, and they were accompanied by a kitten named Saxon, given to them along the route by a fan. Alice made additional road trips alone and continued to speak and campaign for suffrage until the 19th Amendment was passed in 1920. She also developed a device for aligning paper in typewriters and received a patent for it.  Later in life, she raised Scottie dogs.

Nell Richardson was born in Virginia around 1890. She was about 25 years old and staying with Alice Burke in 1915. Not much is known about her early life or her life after her road trip with Alice. She was the Organizing Secretary for the New York City suffrage party. On the road trip she was most often the cook, and also made dress repairs along the route. She was considered an ardent speaker on behalf of suffrage.

I chose to portray Alice and Nell because I was captivated by the stories about their road trip.  Their trip was an ambitious one for anyone at that time, and for two women to attempt it alone was very singular. They were both quite accomplished in many ways, and were very resourceful. They encountered many obstacles and problems along their route. The roads were not very good in many places, and they were often the only vehicle in sight for days. They had an encounter with a rattlesnake, were lost in the desert, had to walk for miles to get assistance when their car was stuck in mud, camped along the way, dodged gun fights along the Mexican border, and had no smart phone to rely upon. I also found Alice’s life, in particular, to be inspirational. She suffered many personal tragedies but continued to take on new ventures and to excel at them all.