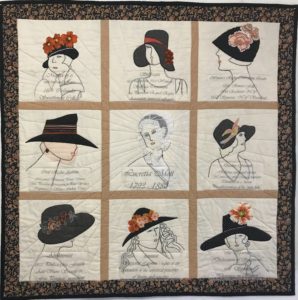 The Many Hats of Lucretia Mott
Ann Diller

Artist Notes:
Lucretia Mott was one of the leading social reformers of the 1800s.  Though she was always seen in a simple bonnet, Lucretia “wore many hats” reflecting various dimensions of her activism including women’s rights, abolition, civil rights, universal suffrage, and religious reformation.   Her belief in the rights of women was connected to her belief in humanitarian concerns for all, regardless of color, gender or social status.  As a Quaker minister, she was cemented in her faith in the “Inner Light”, or conscience, to guide her.  With her lifelong courage and conviction, she opened doors for future generations of women to continue wearing her “hats” of activism. 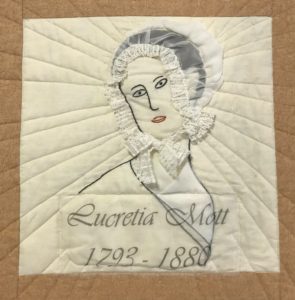 My mother, Betty Johnson, inspired me to quilt.  Before her death in 2011, she had embroidered the hatted ladies.  I am delighted to repurpose some of them to help me tell the story of this phenomenal woman.

Research:
Lucretia Coffin Mott was born in Nantucket, Massachusetts to Quaker parents in 1793.  She attended a Quaker boarding school in New York and stayed as a teaching assistant.  At the school she met and married James Mott who was a continual supporter of her many causes.   The couple had six children.

Lucretia became an unpaid Quaker minister in 1821 and by 1827 went over to the progressive wing of the faith.  The Motts were strongly opposed to slavery and Lucretia’s view of “Free Produce”, not buying products of slave labor, influenced her husband to get out of the cotton business.  She was an early supporter of the American Anti-Slavery Society and was often threatened with violence because of her views.

Lucretia was a delegate at the World’s Anti-Slavery Convention in London in 1840 and despite her well-known speaking skills was denied recognition.  This led to her joining Elizabeth Cady Stanton in organizing the Women’s Rights Convention in Seneca Falls, New York in 1848.  She helped write the “Declaration of Sentiments” at the convention and published her influential “Discourse on Women” in 1850.  In the 1850’s and 60’s, she became more active in causes for equal rights, peace, and Women’s Rights.  She presided over the National Women’s Rights Convention in Washington, D.C. in 1869.

While remaining a Quaker, her beliefs became more liberal and controversial, and she preached for church reform.  She maintained a faith in the “inner light”, or individual moral responsibility.  She helped form the Free Religious Association in Boston in 1867.

In addition to her busy speaking schedule, she was also a wife and mother.  After the Civil War she worked for the rights of African Americans and Seneca Indians.  Her belief in the rights of women was connected to her belief in humanitarian concerns for all, regardless of color, gender or social status.

She went on to help found Swarthmore College in 1865 and continued to attend women’s rights conventions in the 1860’s despite their splitting into rival factions.

Lucretia died in 1880, before the ratification of the Nineteenth Amendment, but was extremely influential in laying the groundwork for it as a result of her lifelong courage and convictions in the beliefs of equality for all.   She opened doors for future generations of women to “wear her many hats” of activism in many areas of life.