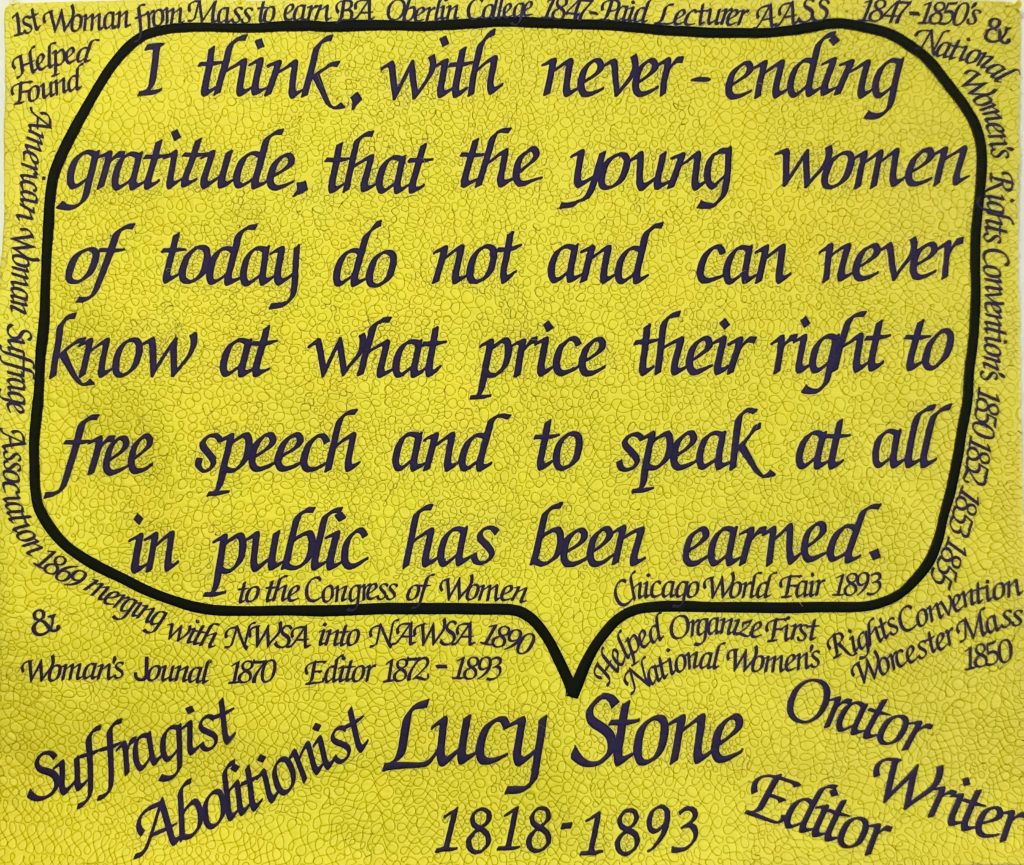 The Last Speech of Lucy Stone

Artist Notes: Lucy’s Stone’s last speech was given at the World’s Fair, Chicago, Illinois in 1893.

Research:
Lucy Stone: Orator, Abolitionist, Suffragist, August 13, 1818 – October 18, 1893
Has a woman a right to herself?
Lucy Stone answered that question in a letter to Antoinette Brown in 1855. “It is very little to me to have the right to vote, to own property, etc, if I may not keep my body, and its uses, in my absolute right.” said Stone.

Lucy Stone spent her life working tirelessly on the behalf of others advocating equal rights for all people regardless of their race or gender. During her career as an orator and lecturer she had books thrown at her head, she was doused with water in the middle of winter and was threatened by angry mobs. None of this stopped her from advocating for the rights of others, it only made her more determined. She is credited for influencing Susan B Anthony into taking up the cause for women’s rights.

Stone was the first woman from Massachusetts to earn a college degree; Oberlin College in Ohio August 25, 1847. After graduating she was hired as a lecturer by the Massachusetts American Anti-Slavery Society and was strongly criticized for talking about both slavery and women’s rights. She responded, “I was a woman before I was an abolitionist.”

When Stone married Henry Blackwell in1855, she became the first known woman in America to keep her maiden name. Others were soon to follow and they became known as the “Lucy Stoners.”

Stone help organized and was a Lecturer at the First National Woman’s Rights Convention in Worcester Massachusetts 1850 and lectured at the National Woman’s Rights Convention in Syracuse, New York 1852, 1853, and 1855. Stone was president of the NWRC in New York, New York, 1856. Stone’s last public speech was addressed to the Congress of Women, at the Building of the World’s Columbian Exposition aka The World’s Fair Chicago, Illinois, 1893. Stone became the first body cremated in New England in 1893.