Artist Notes: This quilt is based on a picture of Alice Paul sewing a star on The Women’s Suffrage Flag.  As the 19th Amendment made its way through the approval process, The National Women’s Party members sewed a star on their “ratification banner” after each state ratified the amendment. They needed 36 states to ratify. 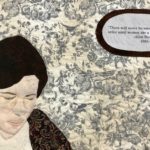 The most difficult job for me in constructing an art quilt is the decision regarding what my quilt will be about.  Once that is decided, work tends to proceed apace; although there are often bumps in the road.  Translating one’s vision into fabric is not always easy.  Completely constructed from cotton fabric, this quilt was made using raw edge applique.  Thread painting was used to enhance areas of the quilt.  The face and hands of Paul were colored with Prismacolor pencils.  The folds in the flag have been intensified with Setacolor paint.

Alice Stokes Paul  1855-1977
My hero of the suffragist movement is Alice Paul.  I can’t remember when I first learned of her, but I became acutely aware of Paul during my work on the campaign for passage of the Equal Rights Amendment in the late 70’s/early 80’s.  She is a mother of the ERA, although her campaign for the rights of women began with her active participation in the successful movement to acquire the right to vote for women, and she is most known for this.  She dedicated her life to securing equal rights for all woman.

Paul was born in Mt. Laurel, NJ, in 1885, the eldest of four children, to Quaker parents.  She was reared to believe in gender equality and the need to work for the betterment of society.  Her mother was a member of the “National American Women Suffrage Assn.”  Alice Paul graduated from Swarthmore College in 1905 and moved to England in 1907 to study social work. It was there that she became “radicalized.”  She participated in demonstrations, hunger strikes, breaking windows, and other protests in the effort to improve the status of women.

She returned home in 1910 determined to re-energize the movement for women’s suffrage.  Paul organized an event in Washington which achieved headlines and as well as discussion among politicians.   While she agreed with Carrie Chapman Catt, president of NAWSA, on universal suffrage, they disagreed on the method to achieve suffrage.  Paul and her followers split and formed the National Women’s Party (NWP).  The NWP favored a more active approach including demonstrations, imprisonment and hunger strikes.  Partially in response to this and the outcry of the public about the treatments of the women, President Wilson in 1917 announced his support for a suffrage amendment. Congress passed the amendment and the 20 states necessary ratified the amendment and it became law on Aug. 26, 1920.

Following this, Paul and the NWP introduced the Equal Rights Amendment in 1923 as the next step in bringing “equal justice under law” to all citizens.   While Paul labored almost without ceasing for equality, it took almost 50 years for the ERA to be passed by Congress in 1972 (when Paul was 87). It failed ratification 3 states short of the 38 states necessary by the 1982 deadline.  Paul died at the age of 92.

About fifteen years ago, a friend and I embarked on a road trip to learn a bit more about some of our foremothers.  We went to Val-Kill and Hyde Park to learn more about Eleanor Roosevelt, to Seneca Falls, NY, to the Woman’s Rights Historical Park, and to Mt. Laurel, NJ, and Paulsdale to learn about Alice Paul, our hero.  We visited Paulsdale (Paul’s home), which was in the process of being acquired by the Alice Paul Institute.  Paul is buried in Westfield Friends Burial Ground which we visited.  We were dismayed to discover that her grave is one of many, many like graves.  Luckily, we found a groundskeeper who was able to direct us to her final resting place.  I could not help but think in burial she achieved equality.