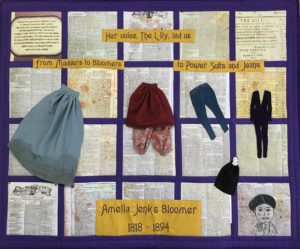 Artist Notes:
Research:   Amelia Jenks, an early pioneer for women’s rights and suffrage, was born in 1818 into a Presbyterian family and spent her childhood and early adulthood in New York.  As a young woman she was employed teaching school, and as a governess and tutor.  In 1840 she married newspaper editor Dexter Bloomer who came from a Quaker background.  The couple resided in Seneca Falls, New York and became increasingly interested in social and political issues during that period.  Amelia began to write for newspapers advocating for social, moral and political justice in letters published anonymously. 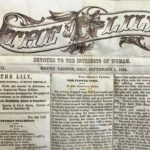 In 1849 she began publishing The Lily, the first U.S. newspaper edited by and for women.  It addressed the many issues confronting women’s rights activists of the era as well as temperance.  In 1854 the Bloomers moved to Mount Vernon, Ohio where Amelia continued publishing The Lily.  There she popularized the radical new women’s clothing style which bore her name. Her newspaper became a venue for the publication of stories and articles by many radical women writers.  She later sold it and traveled West where she continued writing, lecturing and advocating for suffrage and women’s rights.