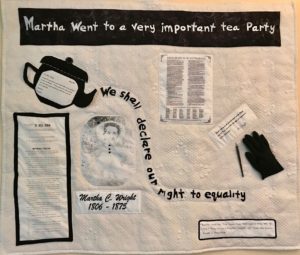 Artist Notes:  As I began to pursue an interest in learning more about the women who persisted so valiantly to gain my right to vote I viewed an image of the original “Declaration of Sentiments”. I noticed that Martha Wright’s was the last name appearing at the bottom of this important document which led to the Seneca Falls Convention. It was a name unknown to me and I wondered who she was and what her role had been. 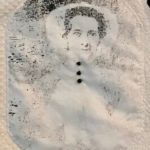 Reading “A Very Dangerous Woman”, the biography of Martha C. Wright, took me back in time for a taste of the extreme commitment and sacrifices made by our foremothers who are to be credited with gifting today’s women with hard-won rights.  The title of the biography is a descriptive phrase attributed to a neighbor of Martha’s who held the opinion that activism might disturb the norm. It is today’s women who must be vigilant in recognizing the value of women’s rights, perhaps question the norm, and accept the baton to continue the struggle.