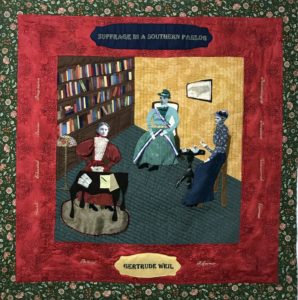 Suffrage In A Southern Parlor

Artist Notes:Gertrude Weil (1879-1971) is an amazing model of a woman challenging society. The artist stumbled upon Leonard Rogoff’s book Gertrude Weil Jewish Progressive in the New South in her local library and discovered this little-known force in the suffrage movement.  She is most likely unacknowledged because she fought in a state that failed to ratify the 19th amendment.

Gertrude was unable to influence her own North Carolina officials and her success ultimately came through the hands of her counterparts in other states.  (Tennessee was the last vote needed to create the perfect 36 votes to ratify the 19th amendment.)  However, Gertrude’s story is the story of so many who fought and are fighting today for women’s rights.   Gertrude was one of a great many who gave of their time, talents and resources to press for change.  Her contributions mattered even if much of them are lost to history.  She opened the minds of many in North Carolina and saw her efforts rewarded in 1920 when 120,000 North Carolinian women registered to vote.

This multitextured quilt depicts Gertrude Weil sitting at her desk amassing letters to persuade political officials and other prominent members of society to join the cause of women’s suffrage.  Gertrude was aware that southern women would not take to the antics of those in the northern suffrage movement.  She played to southern sensibilities by hosting meetings in her own parlor and by taking executive positions in the North Carolina League of Women Voters, the North Carolina Federation of Women’s Clubs, and the Goldsboro Equal Suffrage League.  The women’s faces are photographs printed on fabric as are some of the details. The artist is in the center stitching sashes as she imagines she may have done had she been alive at the time.  Most of the fabrics were taken from old decorator’s sample books and the larger pieces were found to match the style.  The top was hand stitched and fused and then machine quilted.

Living in the small traditional southern community of Goldsboro, North Carolina, Gertrude stood out.  She was Jewish in a predominantly Christian community, but she and her parents were well integrated into both Jewish and Christian society socially and politically.  She remained unmarried by choice in a time when marriage and childbearing were seen as a woman’s true calling and worth. She valued her education at Horace Mann Boarding School in New York City and Smith College and firmly believed that education is the way to progress but struggled with what her education had provided her: intellectual fulfillment without vocational training.  Wealth and privilege afforded Gertrude opportunities to push society forward and she took them.  Gertrude found fulfillment in advocating social reform for women through the suffrage movement, a commitment to public service and later to the cause of racial justice.