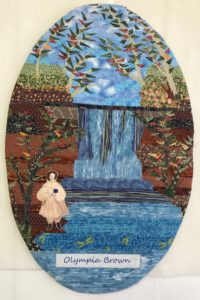 Artist’s Notes: When MVAQN decided to recognize the 100th anniversary of the 19th Amendment, I contacted Scott Sanders, archivist at Antiochiana, Antioch College, inquiring if there was an alumna suffragist.  He introduced me to Olympia Brown, class of 1860, a most remarkable woman and his favorite Antiochian. 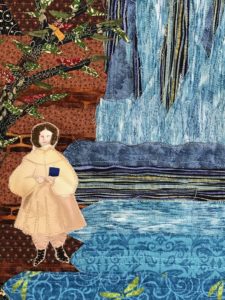 My quilt places her in bloomers beside the Cascades in what is now known as Glen Helen.  Since most of our audience would be local to the Miami Valley, I felt many would know the Cascades and feel a kindred spirit with this young woman walking the Glen.

Olympia Brown was born in Michigan in 1835 to a Universalist family who valued education.  She was not able to attend University of Michigan, as they did not yet admit women.  She enrolled at Mt. Holyoke Female Seminary but found it too strict for her already progressive ideas.  She subsequently came to Antioch in 1855 and her family moved to Yellow Springs with her.  Her siblings attended Antioch as well.

Olympia adopted the “Bloomer Girl” fashion, a pants-skirt combination, which was ridiculed by fellow students and locals.  It was comfortable and practical, but also scandalous.  She and her friends took long walks for exercise as physical education was not available for Antioch women.

My opinion is that Olympia became a public speaker in her first-year English class.  The instructor assigned in-class orations and readings, stating “All the young men will be required to give speeches before the class.  The young women must bring manuscripts to class and read from them.”  Olympia did not agree and delivered a rousing oration from memory with her manuscript rolled up in her hand.  An orator is born!

She entered the Theological School of St. Lawrence University in Canton, NY.  In 1863 she received her ordination by the Northern Universalist Association at age twenty-eight, the first woman in America to be ordained by a regularly constituted ecclesiastical body.