In 2010, after several Miami Valley Art Quilt Network members saw an exhibition of sliced quilts – slices of an image each interpreted by a different artist – and decided to try it.   The MVAQN focused on images which were recognizably Dayton.  So began the Dayton Landmarks.

Ronnie Doyal photographed several locations and several were selected because they “said Dayton” and would slice well.  The images were printed and sliced.  An original image and a slice was given to each artist.  The slices were distributed by lottery, but trading was permitted.

Our first exhibit was May 2012 at the Dayton Power and Light Stage at the Schuster Center in Dayton.  The quilts were well received and MVAQN decided to do another set.  There are 14 quilts in the set.  The quilts were exhibited extensively from May 2012 through at the Dayton Metro Library Main Branch, Aullwood Audubon Center, Schuster Center,  Southminster Presbyterian Church (Centerville), Dayton Womens’ Club, St. Marys Church, Fifth Third Field.

These two classic buildings, The Arcade and The Old Courthouse, stand across the street from each in downtown Dayton. 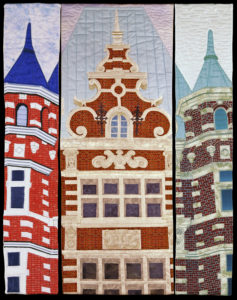 The Arcade:  left to right, Dianne Boley, Fran LaSalle, Kate Burch
Note the variety of fabrics used for the bricks and roofs. 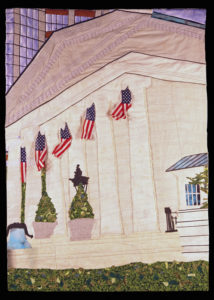 The Old Courthouse: Maxine Thomas
This is the only image that was not sliced, but since it says “Dayton” is was selected.  Note that the flags are real flags.

Two Dayton churches, Sacred Heart and St. Marys, were selected, as well as the University of Dayton Chapel. 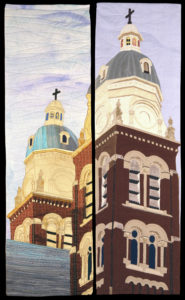 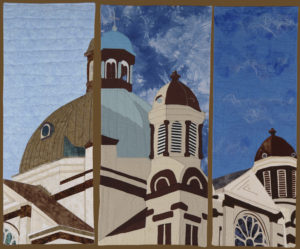 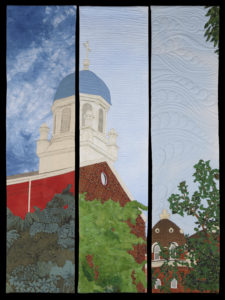 The building in the background is St. Joseph’s Hall.

Orville and Wilbur Wright and John Patterson, entrepeneur and founder of the National Cash Register, are three prominent Dayton inventors.  The both have monuments in Dayton.  The Wright Brothers are captured in a modern monument that appears in several locations in Dayton.  The Patterson Monument, a classic man mounted on a horse, stands in Hills and Dales Park, his donation to the city. 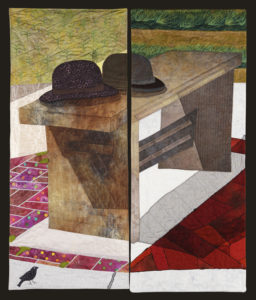 On the left, note the fabric used for bricks and the three dimensional moss.

On the right, note the inscription,  “Whose gift of powered flight lifted the world  forever skyward.”  The fabric for the bench was printed from a photograph of the slate tile in Deb’s bathroom 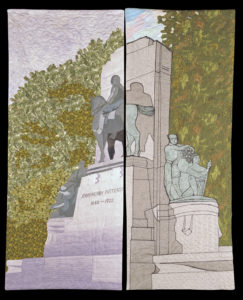 Dayton was part of the extensive canal system of the 1880s.  It is preser 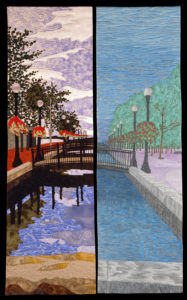 ved as a park near the old industrial part of town.  In addition, a new minor league ballpark has been built near the canal.  The Canal: left to right– Ginny Crabtree, Susan Schaller.        Note that the right side was painted on the fabric and then quilted 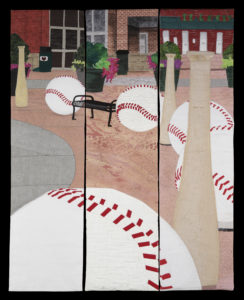 The Carillon sits on a knoll on the shores of the Great Miami River.  This two panel quilt is interesting for how different the panels are.  Lisa Quintana received the left slice 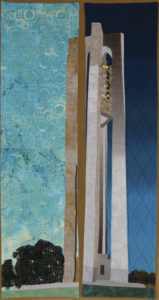 composed  mainly of sky, a sliver of the Carillon and some small trees. Note the fabric she chose and her quilting.  The trees were rendered with black lace.  The right half includes most of the Carillon and sky.  Sue DeSantis selected variegated fabric for the sky, and embellished the Carillon with real bells and the sky with crystals. 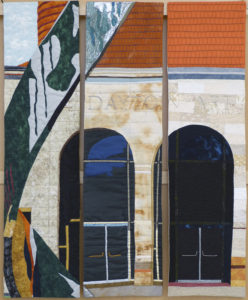 The Dayton Art Institute also rises above the Great Miami River. This particular view of the entrance to the DAI with the stainless steel structure was selected and cropped so that the words “Dayton Art”  stand out. Note three different fabrics used for the stone facade. On the left, Lisa Quintana, selected a print similar to the stone; in the center, Mindy Marik uses a rust dyed fabric; on the left, Lori Gravely worked with traditional quilt prints.

Dayton has many industrial buildings from the twentieth century.  Many of have been repurposed; several have interesting features. The water tower on top of Mendelson’s can be seen from many points the city.  Liz Schneider, the artist for the piece with the smoke design 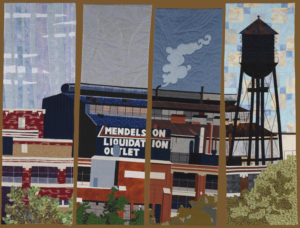 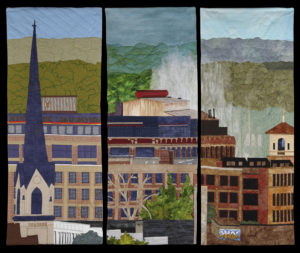 The photograph for this view of Industrial Dayton was taken on the highest point in the city, Woodburn Cemetery, looking west toward the river.  Besides capturing the industrial buildings, Ronnie caught the river fountains in action, and two of the downtown churches, St. John Lutheran on the left, and St. Joseph’s on the far right. Left to right: Dianne Boley, Chris Landis, Pam Geisel.

And finally a special thanks to our crew of husbands support us and help with whatever task needs doing! 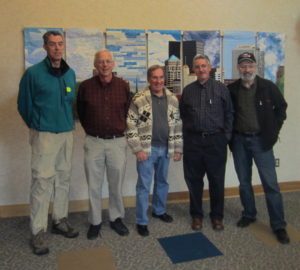