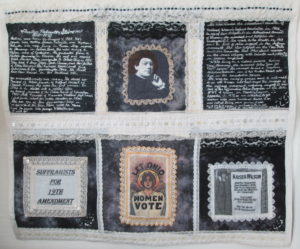 Size:  35” h x 44” w
Construction:  Hand dyed black linen napkins topped with the biography of Pauline Perlmuttter Steinem, images from suffragist movement, old and new laces, writing in iridescent white acrylic inks.  I used Deco Bond on the back of the quilt to make it sturdy and to hang better.  The backing is a piece of fabric given to me by a friend after a trip to Spain and Morocco. The pictures are Google images from the suffrage movement.  Gloria Steinem is her granddaughter; she gave me permission to use her information she wrote in an encyclopedia.  I also used some information that I saw on Finding Your Roots on PBS from an interview with Gloria.
Materials: Black dyed linen napkins, white iridescent ink, black iridescent inks, black and pewter foiling, a variety of antique and newer laces, kimono silk thread, deco bond, linen white print fabric from Morocco, Pellon fleece batting.

Artist Notes:
I enjoyed researching and planning the project.  I work as I go.  After the pieces are together, then I decide the design for the quilt construction.  I use Deco Bond in the project. It adds stability, makes free motion quilting easier, and definitely makes the project hand better.

Pauline was born on August 4, 1866. Her parents were Bertha Sisower Perlmutter and Hayman Perlmutter, who were living in Russia. They moved to Germany in Pauline’s teens during a reformation wave of Judaism. She graduated from a teacher’s seminary in Bavaria. She then met and married Joseph Steinem. They emmigrated to Toledo, Ohio in 1884. They had 4 sons, Edgar, Jesse, Clarence, and Leo [father of Gloria Steinem]. She handed down some fine embroideries to her granddaughter, Gloria. She must have been trained in the traditional arts.

Her accomplishments were many. She served as President of the Toledo branch of National Council of Jewish Women. She was the first woman in Ohio to be elected into a political office in Ohio as board member of the Toledo Board of Education, 1905-1908. Founder of Macomber Vocational High School [first public school for public education in Ohio]. One of the few women listed in Who’s Who at the time.

Gloria knew her as Mama “Einie”. Her favorite bible passage was, “Whither thou goest, I will go”.

She also headed the educational committee of the National Women’s Suffrage Association in 1908. As one of two delegates to the International Council of Women, she marched and testified in Washington D.C. She wrote to her senator in 1913 about the lack of police support in the Suffrage movement. She also testified in the New Ohio Constitution Committee that Ohio placed women in the same category with convicts and patients in insane asylums.

While living on a widow’s income during Nazi Germany, she ransomed fellow Jews for $500.00 apiece. She managed to save a nephew, Nikolaus Perlmutter, son of her brother, Baruch who died in the concentration camps.

She was an amazing woman and a role model to us all. Women have reaped the rewards of the Suffrage movement as myself. I was part of the Affirmative Action Movement in the late 1970’s. I became an Operating Engineer Apprentice in 1979 as a part of the movement to get women into non-traditional trades. I’m now a retiree living on a pension as one of the first women in our trade in Dayton, Ohio.