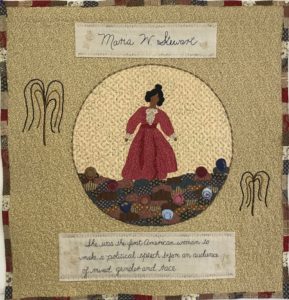 Artist Notes:
I decided to depict Maria Stewart’s historic lecture at Franklin Hall in Boston. My choice to use Civil War reproduction fabrics in this quilt was influenced by the fact that Maria Stewart lived through the times that included the Civil War. The layout and style of this quilt weren’t planned. The more I worked on the quilt, the more it reminded me of the antique samplers that were stitched by young women of the nineteenth century and that became my inspiration for the style of “Maria”. Research on this project has expanded my knowledge of History as we continue on our American journey.

Research:
In doing research on the Suffrage Movement I was surprised to find that at one time the fight for the rights of women in America was interwoven with the struggle for the rights of people of color and the abolition of slavery.  The book Fighting Chance: The Struggle over Woman Suffrage and Black Suffrage in Reconstruction America by Faye E. Dudden documents a parting of the ways between the leaders of the Women’s Suffrage Movement and the leaders who were advocating for Suffrage for people of color. I was taken aback by the racist things that were written by some of the prominent women suffrage leaders of the time against Black men who had been, like them, also seeking equality and the right to vote.  There was a brief mention in the book of an early human rights activist, Maria W. Stewart.

She was born free in 1803 in Connecticut, left an orphan at age 5 and bound out to servitude with a minister’s family until the age of 15. While there she had access to the Bible and books. After leaving service, Maria worked as a domestic and moved to Boston where she was married in 1826 at age 23 to James W. Stewart, a member of Boston’s middle class. They had no children and Maria was left a widow just three years later. She was cheated out of her inheritance and was left on her own to begin again.

Maria W. Stewart cracked open the door for women’s rights by being the first American woman to lecture in public about political subjects: education, injustices, and human rights before an audience of mixed gender and race.  She was a devout Christian who referenced the Bible in her speeches. If you read them you can tell she was a fiery speaker who challenged the acceptance of boundaries, especially for women. She spoke of activism, faith and hope. Her writings were published in Garrison’s The Liberator and she lectured for only three years before being shunned by Boston’s middle class because women at this time just didn’t do such things. This was the time of the Culture of Domesticity for women.  The woman’s sphere was the home, children and church. Outside of the home – business, finances, politics and voting, public speaking etc. belonged to the man.

Maria moved to New York, where she furthered her education, published her works, and remained active in political matters that did not include public lectures. She became an educator and taught in schools and Sabbath schools. She lived for a time in Baltimore before moving to Washington D.C. where she eventually became the head matron of Freedman’s Hospital and Asylum in Washington, which was also a refugee camp for displaced slaves after the war. She died there at age 76.