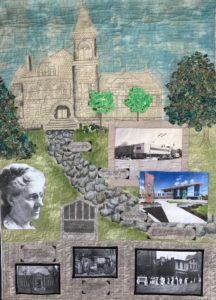 Artist’s Notes:  From the shadow image of the first 1800’s building to the bright image of the current building we can track the evolution of Electra’s contribution in improving our access to the vast amount of knowledge contained within these library walls.  Digital images showcase important innovations and events throughout her career.  I’ve chosen Cooper Park as the backdrop to showcase the images as it is a constant in an ever-changing landscape. 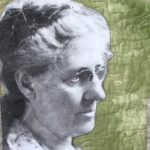 Electra C. Doren made an extraordinary impact on the operation of the Dayton Public Library.  Her strength and intelligence allowed her to succeed at a time when women were not encouraged to step forward and champion new ideas.  Her accomplishments helped set the example for the important  role women could and would play in the new century.

Research:
To understand the role Electra played in the suffragist movement it is important to visit the contributions she made during her lifetime as a dedicated public servant.

At age 18 Electra began her career as a librarian in the Dayton Public Library, an acceptable job for a young woman in 1879. In 1896 Electra became head Librarian of the Dayton system. In her first year of leadership she established a 2-year Library training school in Dayton. This was only the second such school in the United States.  She worked in the new library building established in Cooper Park in 1897. During these early years, she took on the daunting task of creating an analytic dictionary catalog of the books and materials owned by the library system using the new Dewey Decimal System. This system allowed the public to access the shelves for the first time, thus increasing usage of the libraries’ materials. Among the many innovations Electra initiated during her first tenure with the Dayton Public Library were school branch Community Libraries and a traveling library system for grade schools.

She became a founding member of the Ohio Library Association during 1895 and served as President in 1906.

Electra left Dayton in 1905 to become Director of the Western Reserve Library School in Cleveland, Ohio. However, the flood of 1913 brought Electra back to Dayton to resurrect the badly damaged building in Cooper Park. Under her leadership the Main Library reopened to the public in January of 1914.  During that year, two new branches, East Carnegie and West Carnegie, were opened. She also established two Book Wagon routes to bring library materials to the outlying areas of Dayton.

When Alice Paul came to Dayton during her cross-country motorcar crusade, it was likely that Electra was in attendance cheering on her fellow suffragists. 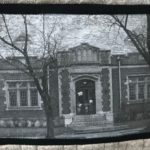 Electra died in 1927 at age 66.  In 1928, the North Dayton branch library was dedicated in her honor for her lifetime work for the citizens of Dayton.  It is one of the few public buildings in the United States named for a woman.  This beautiful building continues its role in the North Dayton community.